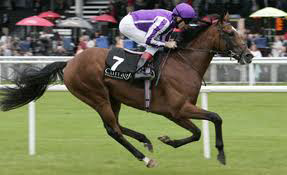 St Nicholas Abbey completed an excellent three days at Chester for Aidan O'Brien's Ballydoyle yard when he took the Group Three Ormonde Stakes on Friday, his first win since finishing the 2009 season as the champion juvenile following a brilliant success in the Racing Post Trophy.

The colt's only subsequent outings since his Group One win at Doncaster had seen him finish sixth when favourite for last year's 2,000 Guineas, and only third when a 4-11 chance for a Listed race in Ireland last month. Confidence seemed to be ebbing away from St Nicholas Abbey before Friday's race, and he drifted to start as the 11-8 second-favourite behind Harris Tweed, but when Ryan Moore sent him ahead with a furlong to run, he showed his class by accelerating nine lengths clear on Chester's short home straight.

Bookies' reps were handing out quotes for races as varied as the Ascot Gold Cup, the King George and even the Prix de l'Arc de Triomphe afterwards, but O'Brien was not at Chester to shed light on his plans and has an ever-growing list of middle-distance horses, including So You Think, Fame And Glory and Thursday's winner Await The Dawn to place in the top races too.

"We never lost faith in him," Paul Smith, son of the colt's part-owner Derrick Smith, said. "He's a quality horse and we always knew that. It was great to see the speed there and he stayed very well. All options are open now, but I guess you'd look at something like the Coronation Cup." 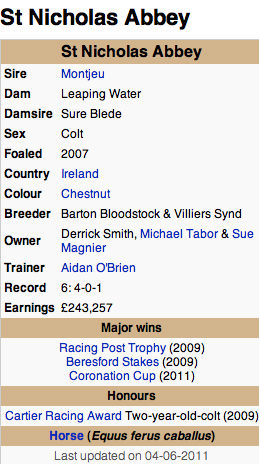 Longchamp in October is a long way from Chester in May, and the 12-1 offered by Hill's about St Nicholas Abbey winning the Arc was an extreme over-reaction to success in what is often one of the weakest Group races of the season. Allied Powers, the runner-up, is much better with some cut in the ground, while Harris Tweed, the favourite, was harried for the lead in the early stages and has never won beyond Listed level in any case.

Yet there is no denying that it was a visually impressive performance, and even after a mile and five furlongs, Moore struggled to pull St Nicholas Abbey up. Ballydoyle drew a blank in the early Classics at Newmarket, but O'Brien's squad for high summer is beginning to look so strong that his main problem may be how to keep them all apart.

This was Moore's fourth winner for O'Brien at the three-day May meeting, but even that was not enough to make any ground on Paul Hanagan in the race for the jockeys' title. Hanagan rode a double in the first two races on Friday, his fourth and fifth winners of the week, the highlight being the success of Glen's Diamond in the Group Three Dee Stakes.

This is normally considered to be a trial for the Derby, but not this year, since the fast-improving Glen's Diamond is a gelding. Richard Fahey, his trainer, does have a big race in mind for him, though, with the Melbourne Cup mentioned afterwards as a long-range ambition.

Glen's Diamond is built to be a chaser, and so not necessarily a horse to be suited by the Roodee's tight, undulating circuit, but he got the job done very smoothly and has improvement left in him yet.

"We like him a lot," Fahey said. "I won't ask him for too much this year and it will be one race at a time, but he'll be a proper racehorse next season. The Melbourne Cup one day is at the back of my mind."