In 2007, St. Nicholas Abbey established a partnership archaeology program with the College of William and Mary, located in Williamsburg, Virginia, USA.  Under the direction of Dr. Frederick H. Smith, the archaeological research program seeks to provide evidence that will help in the restoration, preservation, and celebration of this important historic property.  St. Nicholas Abbey’s archaeological collection is a valuable resource for the study of plantation life in Barbados. 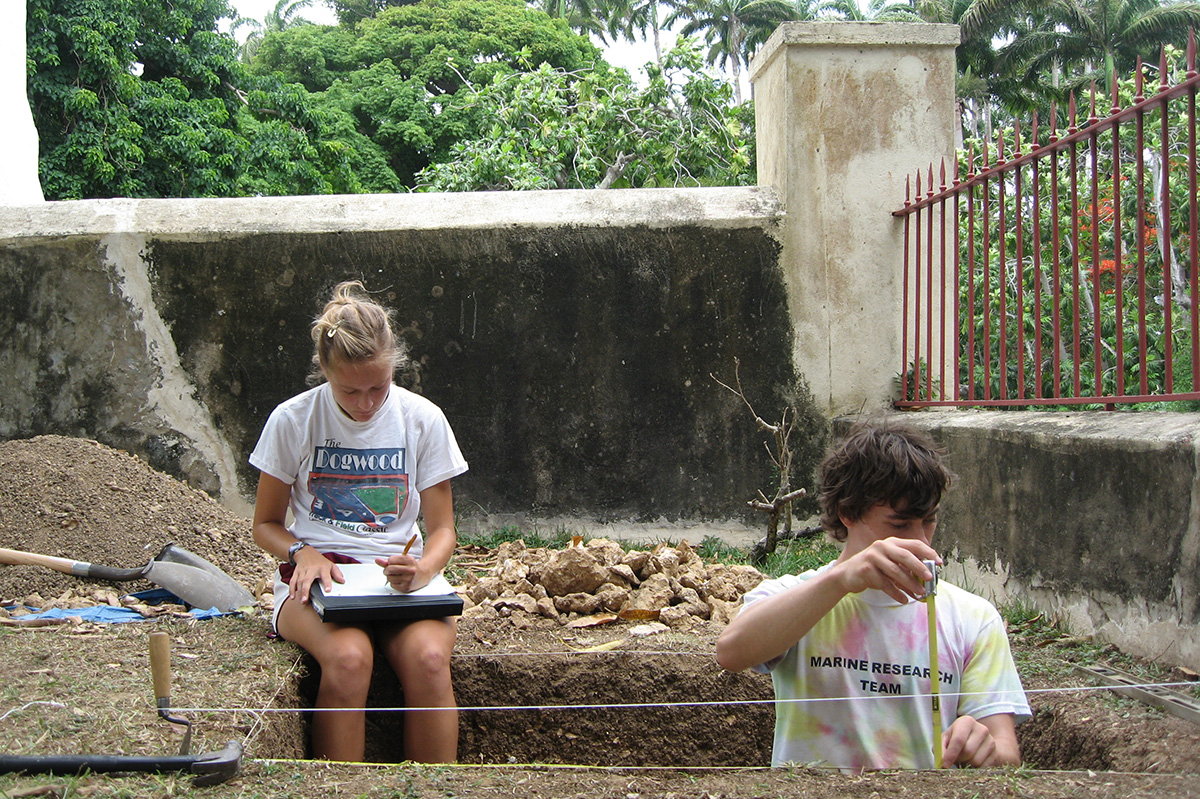 While deeds, maps, paintings, and other documentary sources offer insights into the early history of the estate and its owners, the archaeological investigations aim to put flesh on the bones of history.

Excavations have unearthed thousands of artifacts, including ceramics, animal bone, beads, buttons, gaming pieces, and clay tobacco pipes, which have helped shed light on the daily lives of planters, enslaved laborers and poor whites who lived and worked on the estate in the early colonial era.

The archaeological work has uncovered information about the types of food people on the estate ate, the types of clothing they wore, the types of pottery they used in their daily lives, and the types of leisure activities they pursued. The research program seeks to illuminate the ways in which planters, enslaved workers, and poor whites at St. Nicholas Abbey blended European and African cultural traditions to develop a truly creolized community. The evidence collected also provides important insights into the architectural changes that have occurred at St. Nicholas Abbey great house over the past 350 years.

St. Nicholas Abbey sugar plantation is perhaps the most important heritage site in Barbados. Established in ca.1658, it is a testament to the momentum and energy of the British capitalist system in the emerging Atlantic world. St. Nicholas Abbey produced sugar for Atlantic markets, which helped fuel the growth of various industries in England and make Barbados the wealthiest colony in the Americas in the 17th century. St. Nicholas Abbey great house is probably the oldest standing structure in Barbados. Moreover, it is one of only three Jacobean-styled houses still standing in the western hemisphere. As a symbol of the Barbadian sugar revolution and a product of early British colonialism in the New World, St. Nicholas Abbey’s historical significance transcends the physical boundaries of Barbados. Archaeological investigations are beginning to shed new light on St. Nicholas Abbey’s prominent role in the emerging Atlantic world. The site is well preserved and archaeological deposits are largely intact. Moreover, the archaeological investigations reveal a continuous occupation of the St. Nicholas Abbey property from prehistoric Amerindian settlement all the way up to the present. The majority of materials collected, however, are from the 17th through 19th centuries when St. Nicholas Abbey was a prominent and extremely active sugar-producing estate. 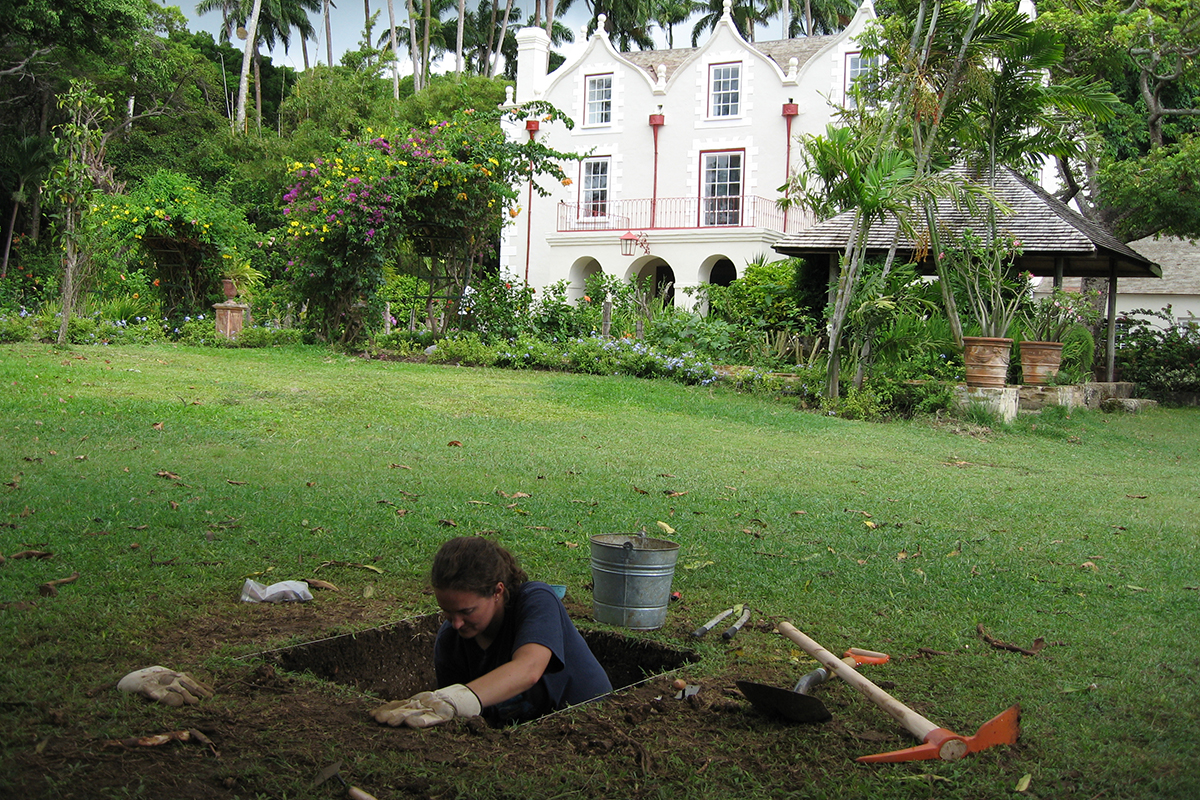 The Warren family is deeply committed to fostering the educational value of St. Nicholas Abbey. The archaeological work conducted by The College of William and Mary is aimed at enhancing the interpretation of this important historical landmark, as well as expanding scholarly research and public education at the site. 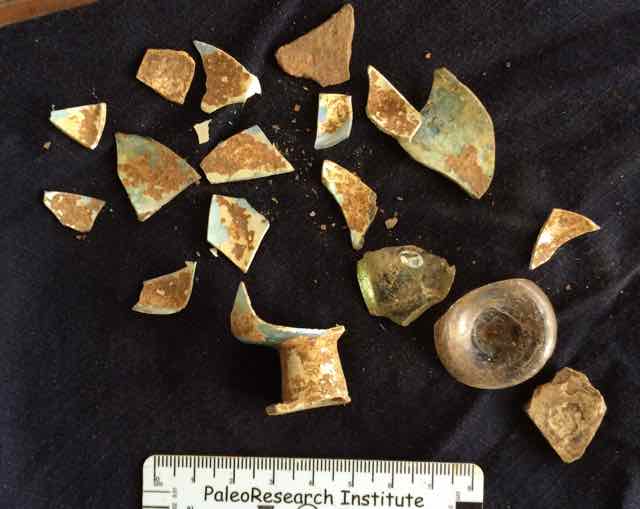 In 2015 and 2016, archaeological investigations conducted by Professor Frederick H. Smith began to unearth evidence of an early dwelling house on a relatively flat piece of land about 100 meters from where the Great House stands today.

The early seventeenth century settlement and occupation of St. Nicholas Abbey had eluded Smith for years. The archaeological investigations revealed that the original dwelling house was a simple post-in-ground structure similar to those that have been found archaeologically on early English colonial settlement sites in Maryland and Virginia in the United States. 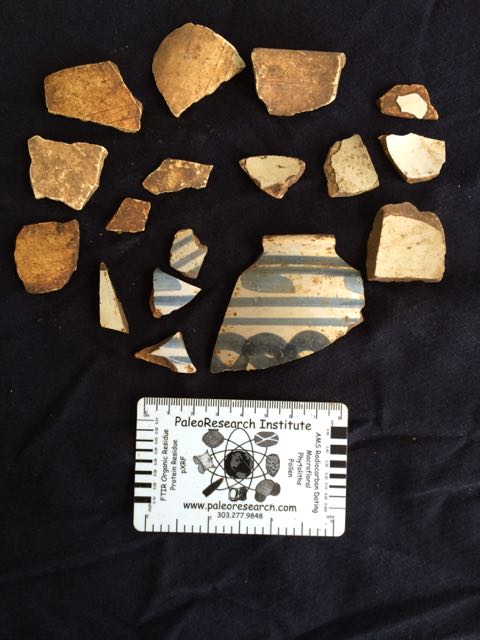 This is the first post-in-ground house ever discovered in Barbados. The structure had a basic wooden frame inlaid with coral rubble that mortared together with a lime plaster. The exterior of the house was also coated with a lime plaster paste to give it a smooth appearance. Bricks were used around windows and doorways. The roof was covered with both flat and curved unglazed red earthenware roof tiles.

The ceramics recovered from the site reflect the relatively humble material world of the first Barbadian colonists before the sugar revolution in the late 1640s. The ceramics consisted mostly of plain lead-glazed earthenware, including several varieties of North Devon earthenware with sgraffito decoration. Tin-enamel glazed earthenware from Holland, popularly known as delft, represent a sizeable amount of the ceramics found at the site and no doubt reflect the strong influence of Dutch traders in the early years of settlement in Barbados prior to the enforcement of the Navigation Acts in the 1650s, which curtailed Dutch trade to the island. Heavy concentrations of delft have also been found archaeologically at early colonial settlement sites in Bridgetown and Holetown. White clay tobacco pipe stem and bowl fragments found at the site also predate the 1650s.

There were a few artifacts indicative of wealth, including a brass escutcheon from what was likely a fine piece of furniture brought over from England. There is a heavy concentration of medicine-related materials, including hand-blown glass vial fragments and portions of a delft medicine pot. Perhaps one of those vials once held the poison used to kill Benjamin Berringer. More likely, they represent the fact that early colonists in these remote areas had to care for themselves. The Berringers obviously placed a great emphasis on their health.

Other interesting finds include several lead musket balls. Berringer was a member of the Barbados militia and in 1651 he helped repulse the forces sent by Cromwell to pacify the Royalist leaders of Barbados. A portion of a writing slate was also recovered, and there is some script that is still legible after 350 years.

The discovery of the home of the earliest English settlers in Barbados in the 1630s and 40s prior to the sugar revolution is one of the most important finds in Barbados and one of the most important archaeological discoveries more broadly. It holds important clues about the lives of the first Barbadian colonists that have never been seen before. Although Smith has excavated early seventeenth century colonial sites in Bridgetown and Holetown, in this instance we can actually connect the artifacts recovered from the site to the known original owners of the estate.