St. Nicholas Abbey’s great house, built by Benjamin Berringer in 1658, is one of just three Jacobean style mansions remaining in the Western Hemisphere, and one of the finest historic sites in Barbados. 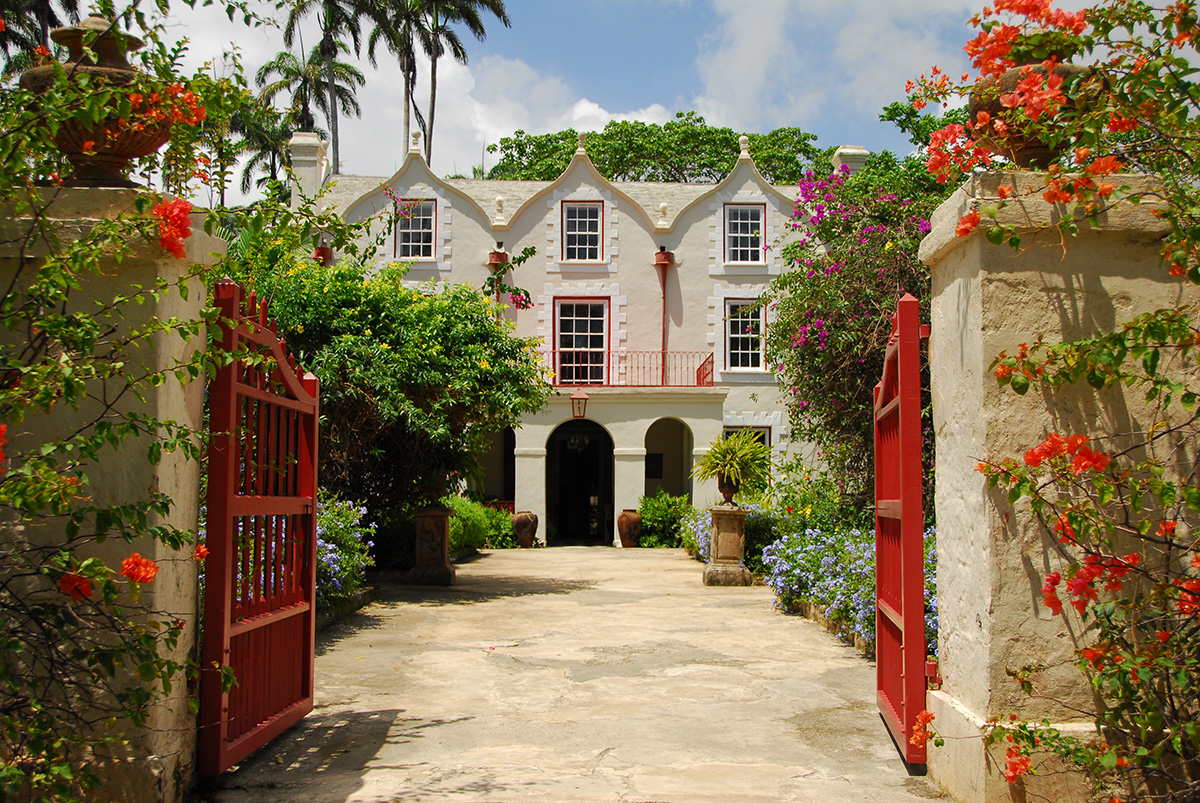 Jacobean architecture, named for King James I of England (1603-1625), was a transitional phase in English design; it merged the Tudor and Elizabethan styles with continental Renaissance influences, including Flemish, Dutch and French architecture.

Colonel Benjamin Berringer likely purchased the plans for St. Nicholas Abbey on a journey home to England; his steadfast dedication to detail is evident by his inclusion of the cornerstone chimneys and fireplaces, unnecessary for a home in the Caribbean where temperatures rarely drop below comfortably breezy.

St. Nicholas Abbey’s elegant curvilinear gables and ornamental detail typical of Jacobean architecture make it one of the most stunning examples of the architectural style surviving today.  In fact, the great house is one of just three Jacobean mansions remaining in the Western Hemisphere; the other two are Drax Hall, also in Barbados, and Bacon's Castle in Virginia, USA. 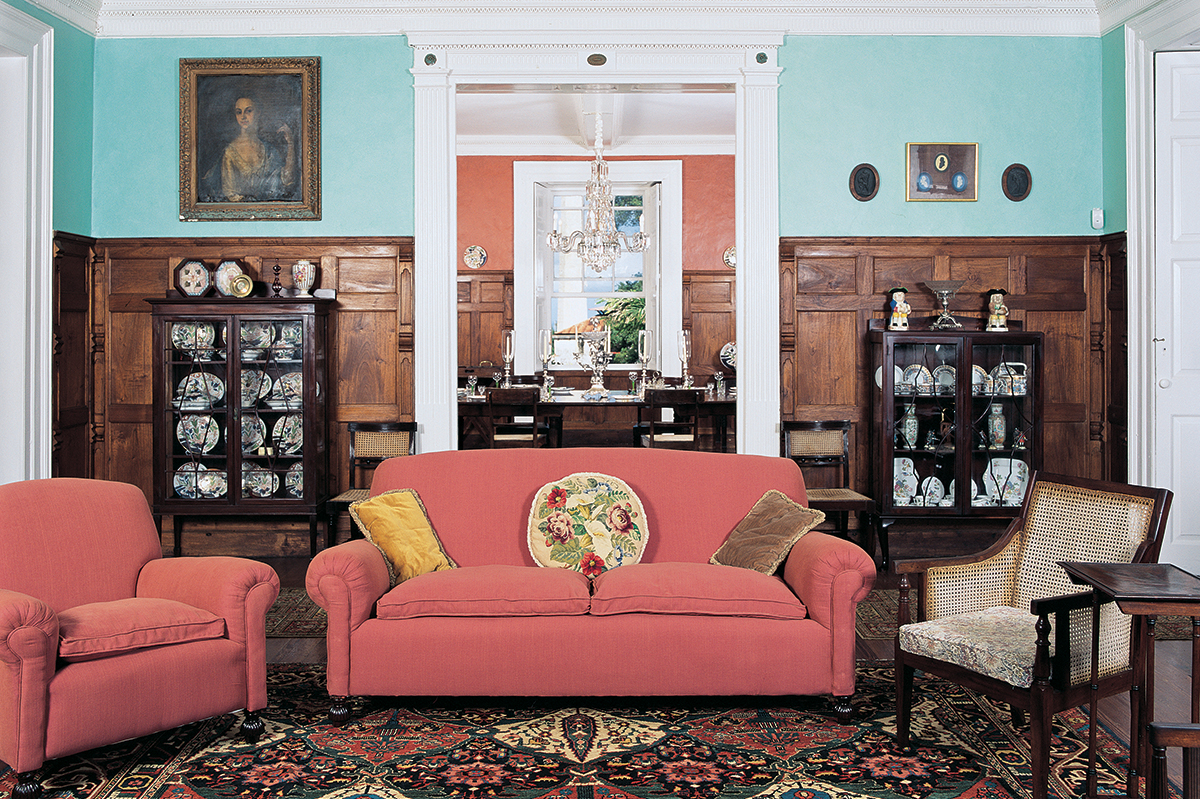 Sir John Gay Alleyne added the Georgian-style triple arcaded portico and sash windows in 1746.  The cedar paneling was installed in 1898 to protect the home from dampness, likely taken from trees that fell during the strong hurricane that hit the island that year.  The Mahogany door, added in 1910, was also felled on the planation.

The roofing beams, while not visible from the first floor, are original to the home; however the original flooring was replaced with Honduras Pitch Pine, imported from North America, in 1910.

Many of the antiques date to the 1800s, including two Wedgewood tea sets. The Sailor's Valentine collection includes wonderful examples of these popular souvenirs of the period, often brought home for loved ones after a long voyage at sea. Featuring intricate designs created from local and imported seashells and other natural materials, the patterns typically centered on a compass, heart or sentimental message.  Although the name suggests the sailors made these valentines themselves, most originated in Barbados, a popular seaport of the era.  The New Curiosity Shop, located in the island's main port by the old ice house in Bridgetown, sold most of the valentines produced by local craftspeople. 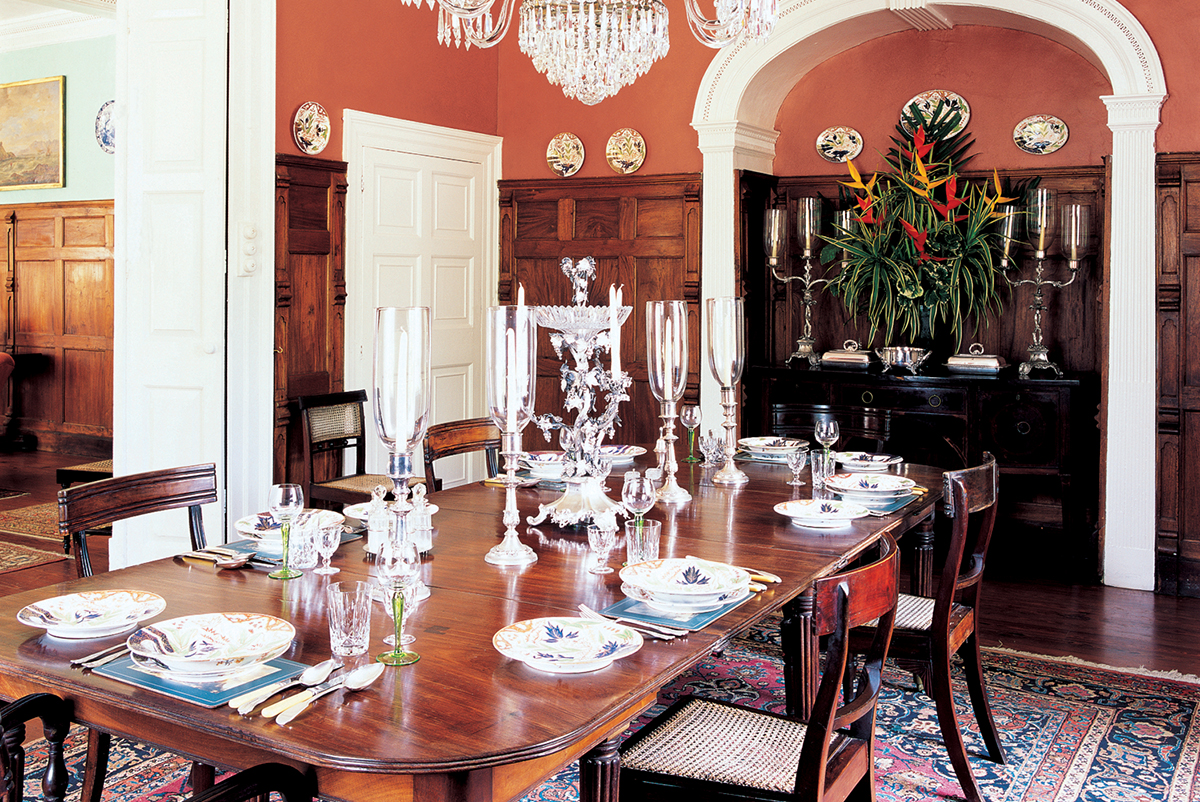 The English Sheraton sideboard c. 1780 is one of the few pieces dating to the original owners of the house.  The dining table and chairs, made locally from Barbadian Mahogany in 1850, features a stunning collection of Coalport China.

Circa 1810, the set is hand-painted with an Amari pattern taken from Japanese silk.  The Coalport name, derived from the village in Shropshire, England where pottery was produced from 1796-1926, is renowned for quality and expert craftsmanship. 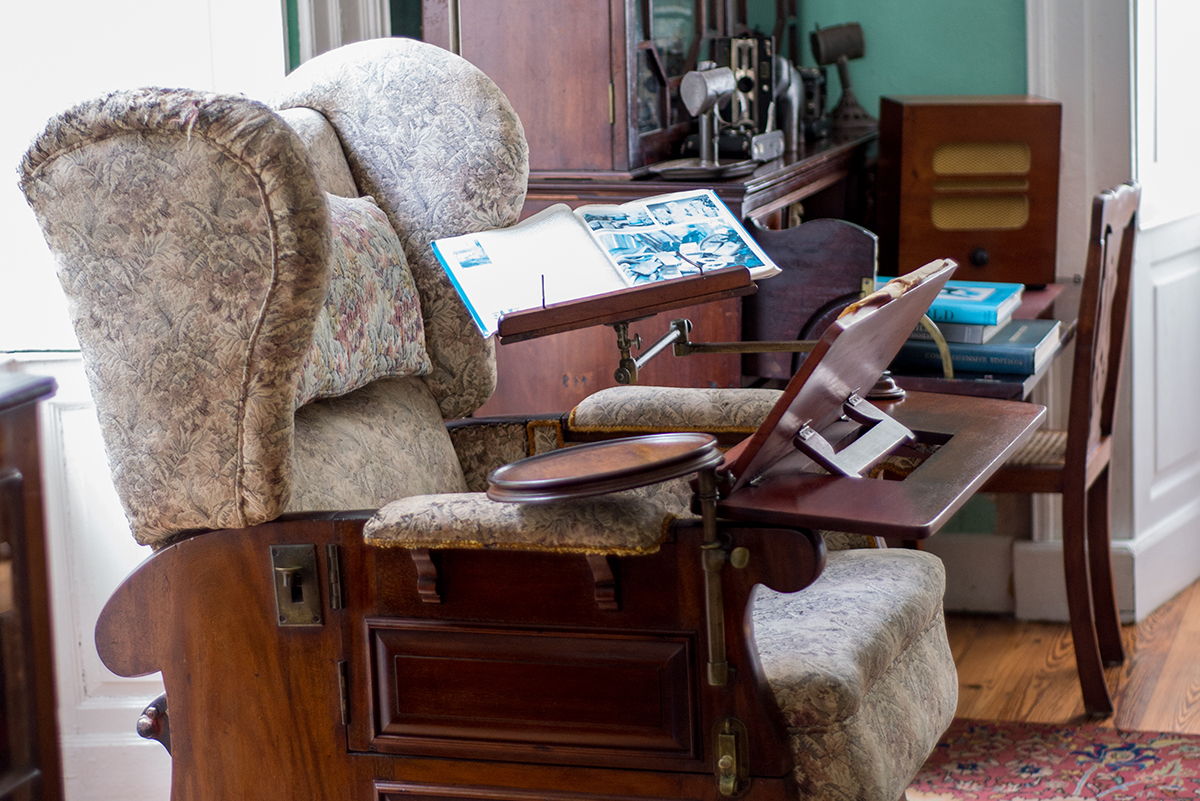 The Burlington Gentleman’s Chair, manufactured in 1935 by Foot & Co. (a manufacturer of hospital equipment during WWI), defined modern relaxation of the time. Described in advertisements as the 'ideal easy chair', it could be transformed into a semi or full length couch with the push of a few buttons.  Featuring adjustable tables, a book holder, reading lamp, backrest and footrest, it was a common spot for impromptu napping. The chair could be easily wheeled into another room for the duration of the nap.

There is also a Mahogany Judge's Chair featuring the Coat of Arms of William IV, made in England in the early 1830s.

A stunning set of Minton China (c. 1850) is located in the cabinet.  Greatly influenced by French Sèvres Porcelain, English-made Minton China was very popular with 19th century embassies and heads of state.

The collection of 19th century glassware decorated in gold leaf was a wedding gift from the Duchess of Buccleuch to Lt. Col. Cave's grandmother in 1895. 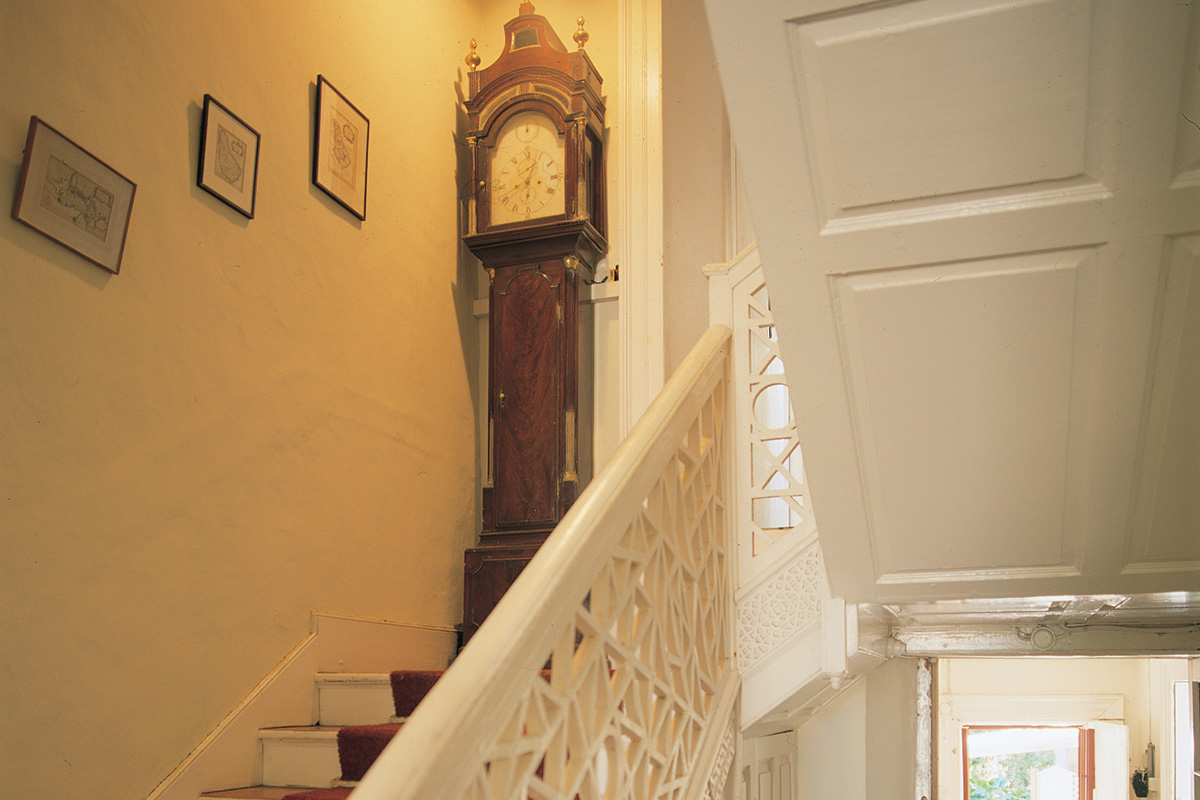 The Chippendale staircase, featuring a different pattern on each flight, replaced the original in 1746.  The grandfather clock, built by James Thwaite of London in 1759, has stood on the landing ever since.

Indoor plumbing was installed on the second floor in the 1930s; there is a full bath on the landing, visible from the bottom of the stairwell.

Stepping down toward the courtyard at the back of the house is an 1825 Barrallier Map of Barbados, the first to refer to the property as St. Nicholas Abbey, a name credited to owners Charles and Sarah Cave.  This map is usually found in book format; if you look closely, you can see the separate pages. 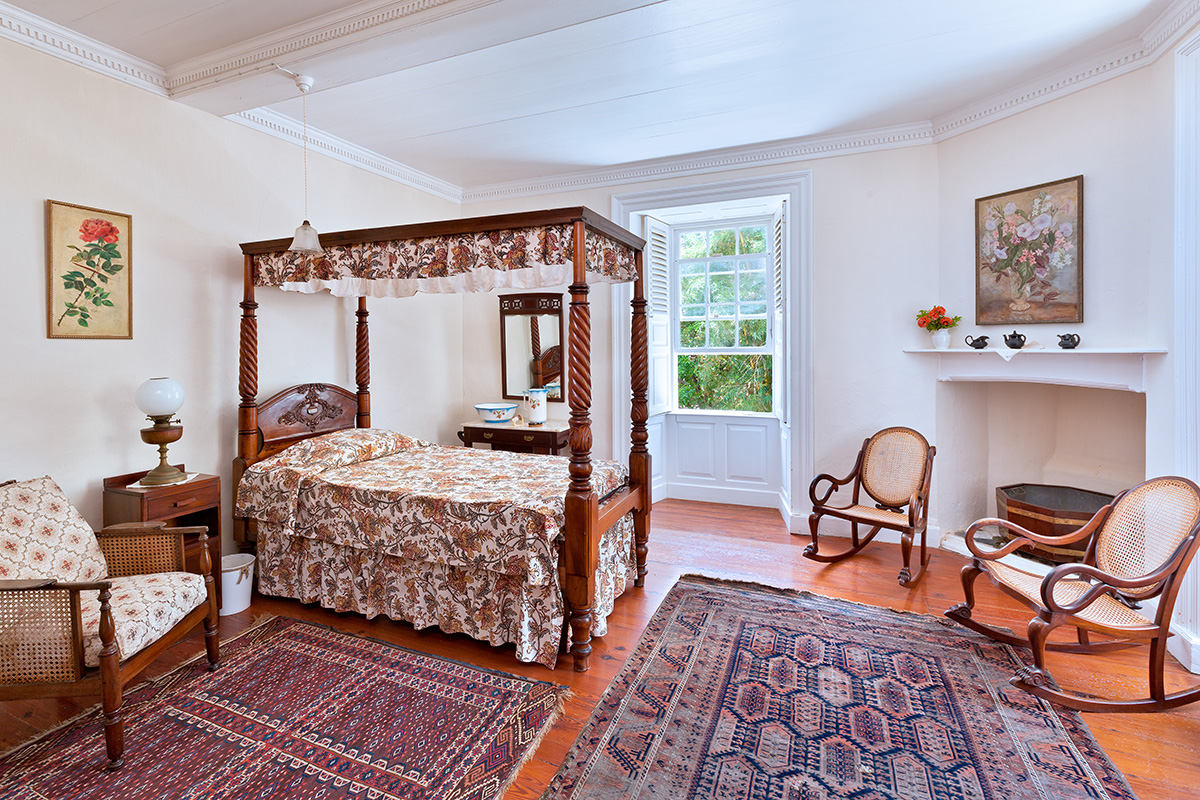 The 2nd and 3rd floors of the home feature seven bedrooms, two with cornerstone fireplaces. The chimneys can be seen from the outside of the house. These floors are not open to visitors in the interest of preservation.